Making a Flute Do Tricks in Pieces Old and New 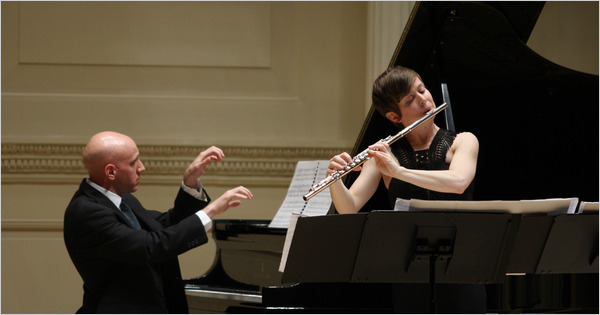 New York is full of talented musicians, as well as artistic entrepreneurs who busily create their own opportunities to flourish. The flutist Claire Chase fits into each of those categories and then some. Both as a performer and as the executive director of the International Contemporary Ensemble, which she helped found in 2001, she has had a hand in some of the most memorable musical events of the last several years.

Somehow Ms. Chase has also found time to further her own career as a soloist, and in 2008 she won the annual Concert Artists Guild competition. On Thursday night that organization presented her in recital before a boisterous capacity audience in Weill Recital Hall.

A demonstration of extravagant technique, broad stylistic range and penetrating musicality was certainly in order, and Ms. Chase delivered. But she also used the opportunity to showcase the talents of her colleagues, enlisting eight members of her ensemble to share in the occasion. (That number included Whit Bernard, the group’s director of development, who provided intelligent, unusually engaging program notes.)

The concert opened with Bach’s Sonata for Flute and Keyboard in E (BWV 1035), with the guitarist Daniel Lippel performing his own deft arrangement of the keyboard part. Ms. Chase’s precise, polished playing had a buoyant spontaneity; Mr. Lippel was an attentive, sensitive partner.

In the modern works that followed, Ms. Chase and her collaborators showed a consistent knack for illuminating communicative strands within knotty conceptions. She and Jacob Greenberg, a confident and insightful pianist, made a kittenish frolic of Franco Donatoni’s prickly “Fili,” and balanced the bright, hard clashes in Pierre Boulez’s Sonatine for Flute and Piano with melancholy lyricism and careful attention to color.

Bach returned in the form of the familiar organ Toccata and Fugue in D minor (BWV 565), improbably reworked for solo flute by Salvatore Sciarrino. Ms. Chase handled racing lines and daunting register leaps with muscular grace, her labor rewarded with a shouting, stomping ovation. As an equally unlikely encore, Ms. Chase played her own arrangement of Paganini’s Caprice No. 24, expertly deploying unconventional techniques to evoke a violinist’s bowed chords and plucks.